A recently-discovered translation from Dutch to Siraya 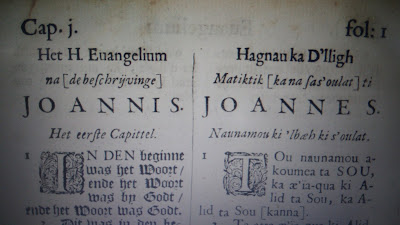 It's not often in one's career that one comes across a book or manuscript that has lain 'hidden' for several hundred years, but by chance this happened to me recently. In Amsterdam in 1661, the Dutch missionary Daniël Gravius published a volume comprising his translations of the Gospels of St. Matthew and St. John in the Formosan language, Siraya, a member of the broader Austronesian family of languages. Until recently, it was thought that only the translation of the Gospel of St. Matthew had survived. However, I recently identified a copy of the 1661 publication which contains both Gospel translations. The Gospel of St. John differs from that of St. Matthew in several respects and will therefore allow scholars in this field to increase their knowledge of this language, which became extinct in the nineteenth century. Hopefully, it will also add to our knowledge of the history of Austronesian or Formosan languages in Taiwan and Austronesian languages more generally.
The translation is based on the Dutch States Bible (Statenbijbel), first published in 1637. This includes several Latin and Greek words, which have been carried over into Siraya. Gravius's publication consists of 70 folios of Dutch and Siraya parallel texts. It is a good example of the Bible translations that Dutch missionaries made in the seventeenth century into languages in East Asia and also illustrates how they mastered new languages such as Siraya in order to translate the Bible and other Christian literature into these languages. It is also a good example of the role that serendipity plays in scholarship!
Posted by Christopher Joby at 5:41 PM