In Norwich, we don't refer to open spaces in the city as 'squares' as they do elsewhere in England, but as 'plains'. Why? There is a strong possibility that this is a result of the influence of the Dutch Strangers who lived in Norwich in the sixteenth and seventeenth century. The Dutch word for 'square' is plein. In Norwich there are several examples of this, such as 'Bank Plain', 'St. Andrew's Plain' and 'St. Mary's Plain'. 'Plain' is also used in other towns in Norfolk, such as Great Yarmouth and Sheringham, where you can stand in 'Lifeboat Plain'. 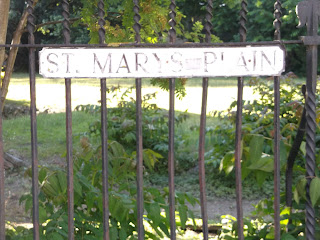 Posted by Christopher Joby at 11:22 PM